A "G" model flap valve prevents back flow. All flap valve models operationally act the same. When there is head pressure from behind (inlet pressure) the flap door opens and discharges the water. When front pressure increases, the flap door will close.

Flap Valves WA-PTKG wall mount units ship with chemical bolts for anchoring the unit to the wall. A wall gaskets placed between the back flange collar and the wall provides leak protection.

The unit sets vertically flush with the wall. The flap door operates with just a few mm of head differential pressure.

Water flows through the valve to allow water build up to escape but prevents rising water levels on the door side from flowing back up the pipe.

Available for all pipe and opening sizes: contact Westatlantic

WA-PTKG wall mount models mount flush with the wall. "G" models are used for conditions where the flap valve sets above the water level most os the time. They may be covered by water in times of emergency and allow outflow again when the upstream pressure exceeds the pressure on the door. Just a few mm differential pressure will allow flow.

The valve is not hindered by its own weight and will open with very little differential pressure. Differential opening pressure are less than 10 mm water column. 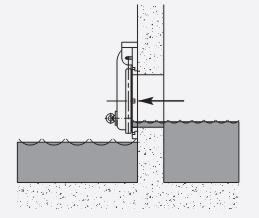 Back To All Products Page